I Love This Girl

For the last time, I slapped my girlfriend, there's no reason anyone should hit girls, and this blogpost is not to cover my ass. I love her.

How I fell in love with Luna.

I never knew that night, a night I thought I would regret would be a night that means a lot to me. I met you; Luna Princess. I was late, and wasn't even planning to show up because I didn't have much belief if anything would happen between us. It was a random date, and as usual; Ridhwan has always been known for one thing. Not for his fame. But him not affording almost anything. And I came there with just ez-link that has a value of $5, and trust me, that is the richest I can get on an average day. So I reached there late, and we had to take a cab. I was trying hard not to show that I couldn't afford the cab by suggesting to walk, but it is obviously ridiculous. Eventually we did take a cab, me, her, and also her friend. She paid the cab and we started the night. Not much of chance for me to do much cause her friend was a barrier between us. Not long after, the barrier was away, and  interacted. It felt easy then what I expected. Despite our shyness which was shown in each others' eyes. I must admit, she was looking fine. But the most that got to me, was those eyes. Those eyes totally locked me in. And there it was that awkward question; "do you like me?", she asked. I wasn't expecting such a question and I answered "did, for now". Breaking a girl's heart was not my thing and I really did like her a lot at that very moment but wasn't trying to keep hopes too high and make it any cheesier if I would say it with "for now". And soon it was time to call it a night. Wasn't looking forward to it, and my plan was just to wait pathetically for the bus. However, from nowhere, she surprised me even more to have breakfast with me. In the cab, which I obviously can't afford, I was feeling super shy and super contented. Wasn't even worrying about how the heck Ridhwan is gonna afford breakfast! And when we got there, she bought 2 sets of Big Breakfast. I was speechless. Touched. Guilty to have expect so little from caring lady like her. We ate and I feel deeper for her. And out of my creativity and randomness, I sliced and arrange my meal into "I <3 U". I was impressed and surprised by myself. Part of me felt that my move was lame and cheesy but then again, it wasn't me. It was my heart that did that. After eating, we just drowned in each others' presence till it was time to apart.

That whole chunk you just read,
was the only thing I can recall to make me happy nowadays. From that first day with her, we dated as I get to know her, and I learnt that her Grandma means a lot to her, and she promised her that her Grandma would see her grow up and be somebody, on stage, and be well-known among the crowd. I know many thinks she was leaching on my fame, a social climber and shit, but the thing is she isn't. She didn't want to watch Ah Boys To Men because she didn't like Noah Yap. She doesn't care about local Youtubers as much as International ones. I got to know how she had a rough past, how she only had that circle of friends to depend on when she was on the edge of breaking down. And it came across my mind, to help be better, starting from her image, to dress appropriately and start making better videos.

Her videos were okay, but I wanted the best out of her. And I know what kind of videos will make it or not. I also learnt that her past with guys she dated were not nice, her friends, and she was a patient of depression. Thus, without thinking well, I felt the strong urge, that huge courage, to give her something look forward in life.

I was glad she finally agreed, after much persuasion, she took a step, became a bubbly and sweet looking girl, and I was overwhelmed. My fans now became her fans. Her videos are tremendously found well. Finally, a chance for her to shine and maybe make her Grandma proud one fine day.

I am poor. I am so called "famous" but I am from the Ghetto. I lived life the hard way. Going out to places, for my own errands, by foot. The truth os sometimes I beg for even 10cents, scroll down my contacts and call the person I am meeting with the public phone cause my phone can't call. I keep hydrating myself with the tap water and would eat a meal a day if I am lucky, which is at home. At this point, I have a lot of projects, mostly is for passion. I live up to it fully. I do anything just to follow the heart. And this time my heart wants the best out of this girl, be it how her past was horrible and so on.

I always thought from the beginning; the beginning of everything, is that I am too poor for any girl. I can't buy her meals too, don't need to go on to flowers and teddy bears. I thought if we were to have an argument, it would just be about that. But then it wasn't. I feel that I am too poor for friends, after school, watching movies and shit, wasn't my thing. Up till today, especially with my bro, Jianhao, part of me don't feel good, accepting deeds and all.

Anyway, one thing i find fucking ridiculous during our relationship is her ex-boyfriend. He was one person, that I felt was always being an unnecessary addition in this relationship of two. I have close friends, a best friend, normal friends, but don't think they should text everyday. I swear I didn't text any girls and even let her scroll my Whatsapp freely anytime. I tell her all my secrets. Plus I gave her my social media account passwords, all of them. But she thinks it's fine for her, to let her ex kiss her forehead in front of me, hold his hand, have a say in everything we do, he is always number one. I can't even imagine how I could adapted all these while, letting her hurt me even more. She claims that's her best friend, like how I have JianHao, and not discover the world with me and make new friends. And the thing is, this ex she has will do every single favor for her. Fetching her home in the middle of the night in his Dad's taxi, making me feel utterly embarrassed. That guy would do anything, everything cause she told me he is capable of everything. It gets worse, and deep inside it hurts more and more.

She has another close friend, who owes her money, doesn't think maturely with her boyfriend and breaks up with the boyfriend more than I could count. They two and her beloved ex had a crazy idea at one time to go ghost hunting. Her boyfriend just got his license and he's driving is terrible. He will miss turns when on the road, the environment is dangerous cause these kids think it's funny to call out wrong directions from the GPS to a super amateur driver like him. He borrowed a car and they got it scratched in a multi-story carpark. I was there, and was just watching these kids. And now ghost hunting? When she was having her period? To Punggol? It's obvious these people were a bad influence.

At this point, you guys should know, I don't do personal attacks, but I comment to the most out of my honesty. I put effort in complementing and correcting.

I told her after her numbers on her social media has grown, both of us gotta take care of our image. She listened at first, taking my advice in changing her image, but it slowly seem to be controlling her. It slowly seem to be me forcing her to rush to make videos. My advice seem to annoy her. She was doing fine but it seems she wasn't that passionate and would learn my guidance. She didn't want the fame. I wanted her to be the best put of her capabilities.

But never knew our relationship would have a new ingredient, violence. And guess who introduced it? Slapping and humiliating me in the bus. Tearing my shirt cause I was too humiliated and wanted to walk away.i didn't hit her at that time. Her reason? I annoyed her. Wow. How bout my reason for hitting girls? No reason. And when girls slapping guys in daylight, it a bus which is filled, it's okay cause she's annoyed? Wow.

For the people out there telling me, "act big, actor so what" or what "career", it shows you still feed on your parents' pocket money and are basically not aware that you are able to earn from what you are passionate in; performing and social media shit. Social media is powerful. And it's where I feed myself. Not like people who get attention from chiobus and get a few retweets. Fucking stupid.

Now all of you see that "guys shouldn't hit girls". Yes. No reason for such things. But what these people, who apparently "care" for her, thinks spreading it and bringing me down will solve things serve fucking "justice". How bout' the fucking threats? Justice league?! Look at her now. Look at me now. I am crushed. I admitted. Is she better now? Walking comfortably in the public? Feeling the fame? Come on! I hope your justice is prevailed. Waiting for one of us to commit suicide? Is that it? Then justice will prevail?

Once again, I am not covering my ass, but I was trying to control the situation. Then it got worse because relationship between two must be between fucking two! Make up or break up, easy! All problems in life, can't solve, control it. I am shattered, crushed, and fucked when I saw the bruises right after. How much guilt and hate I have in me.

And it gets worst, when the whole Internet gets involved, gangsters making me feel in danger, in shame, fucked up, it's everywhere, I can't bring my head up to walk in public or walk alone, all gone and I should be doing the same thing to YOU, dangling my legs on the top of the building and this time let YOU get fucking traumatized, how bout' that?! How about I cut my fucking self, doing whatever you have been doing, scarring and bruising not my face, but my fucking mind. With those intimacy and importance of your ex, letting this jealousy be UNSOLVED like all of my  discomforts, allow that shit just comes like a snowball. But NO! No guys should fucking hit girls you say and apparently nothing else matters.

Once again, I know my mistake, I am crushed, she is crushed. You guys finally did "justice" and I am not covering my ass and saying whose at fault.

My point is to
- it's a problem between 2, not 3, not the whole singapore

I still love her. Every single one asking me to leave her.

For her, I don't know. And to those people who don't really need to get involved but just tweeting about me to get retweets, I'm glad I could help with the RTs.

I love you. I am sorry everyone. 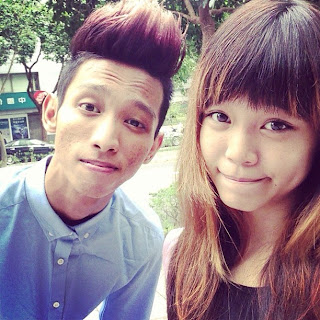 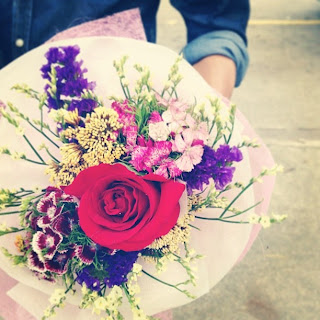 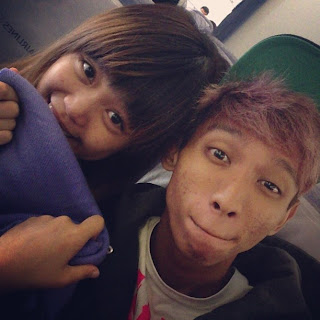 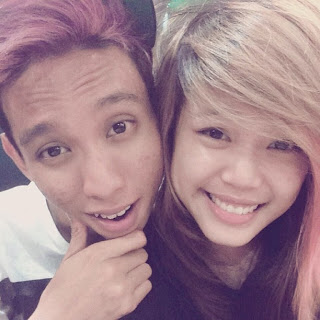 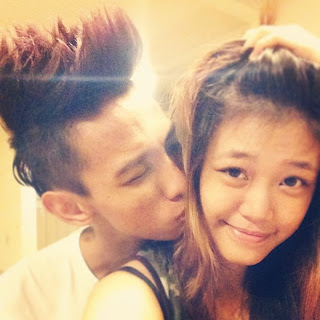